WolfeWare’s team has been in the centre of the development of the market for utility-scale photovoltaic power generation in the UK and worldwide. Some of the UK projects we have been involved with (in inverse date order) are: 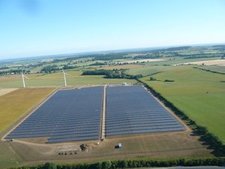 WolfeWare founder, Philip Wolfe, is Chairman of the Westmill Solar Co-operative, which owns the largest community-owned solar power station in the world.

Philip led the board during the public fund-raising for the co-operative (which was 50% over-subscribed) and the acquisition of the 5MW solar park in South West Oxfordshire.

The very first phase of the Chittering Solar Park was a 60MWp stand-alone ground-mounted system near the centre of the present site. WolfeWare personnel project-managed this phase and registered it for the Feed-in Tariffs before the major reduction in August 2011.

The plant has subsequently been extended twice and now has a total capacity about 10MW. We have not been involved in those later phases.

Westcott Solar Park was the first MW-scale project to be connected in the UK after the introduction of the Feed-in Tariffs. It has a capacity of approaching 2MWp and is installed along the length of a runway on a former World War II airfield.

WolfeWare has now been appointed as asset managers for this plant, our directors having handled the original project development all the way from initial planning to connection and FITs registration.

Our experience list also includes the early development planning of the Wychwood Solar Farm. We prepared the initial project layout details, oversaw the production of visualisations (as on the right), and briefed the local planning officers to ensure that consent was promptly granted for this green-field site in the Cotswolds.

We were not involved in the subsequent construction phase of the project.

The very first grid-connected solar park in the UK was a 30kW system installed on the old coal yard of the former Marchwood Power Station for the (now defunct) Central Electricity Generating Board (CEGB) in the early 1980’s.

Philip Wolfe was responsible for the initial development of this project in collaboration with CEGB’s Dr Donald Swift-Hook.

We have advised and participated in a number of other projects on airfields, brown- and green-field sites.

(Our experience and involvement here and elsewhere in the website, refers to activities within WolfeWare and its associates, such as Wiki-Solar & Feed-in Tariffs Ltd, and predecessor organisations, including BP Solar, Intersolar Group & Ownergy Plc.) 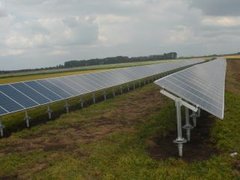 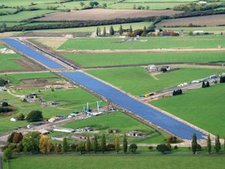 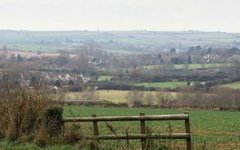