Utility-scale solar power has become widespread only in the last decade, but is now the fastest growing energy sector

WolfeWare’s founders have been in the vanguard of the development of the market for utility scale photovoltaic power generation in the UK and worldwide. Philip Wolfe wrote the first book on the topic, founded the leading information provider and advises on projects and the market.

A brief history of solar parks

The first 1 MWp solar park was built by Arco Solar at Lugo near Hesperia, California at the end of 1982 (pictured left as it was when Philip Wolfe visited in 1983). This was followed in 1984 by a 5.2 MWp installation in Carrizo Plain. Both have since been decommissioned.

In 2004 a community-owned 4MW plant was built in Hemau. The next stage followed the 2004 revisions, to the German feed-in tariffs, starting with the 5MW Leipziger Land project in former Eastern Germany. Several hundred installations over 1 MWp have been since been installed in Germany, of which more than 50 are over 10 MWp.

With its introduction of feed-in tariffs in 2008, Spain became briefly the largest market, with some 60 solar parks over 10 MW, though this market has declined because these incentives were (rather aggressively) withdrawn.

The largest solar parks currently operating have capacities of ¼ to ½  GWp, including First Solar's Agua Caliente plant in South-West Arizona, which was about half built when we visited in late 2011 (see right). Projects at a scale of 1 GWp are now being planned.

Solar parks in the UK

The first utility-connected solar power plant in the UK was built at the former Marchwood Power Station, as referenced here.

It was the introduction of the Feed-in Tariffs that stimulated the first wave of utility installations with about twenty solar parks between 2 and 5 MW connected before the end of July 2011, when tariffs for larger installations were cut drastically. Westcott, Chittering and Westmill were amongst those projects.

The dramatic price reductions over the next year or so brought projects back to viability, even at reduced levels of support. A second wave of installations was completed in the first quarter of 2013, mostly supported under the Renewables Obligation (rather than the Feed-in Tariffs). New projects continue to be planned, consented and constructed, with the UK in 2013/14 amongst the most attractive markets in Europe.

This Wikipedia page has been developed with input from WolfeWare collaborators, and gives a good overview of utility-scale PV applications. 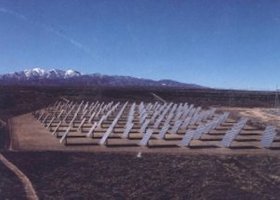 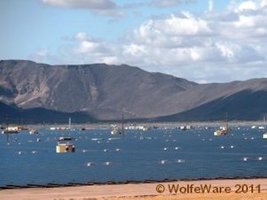