These are no longer part of our business model and so are for sale (ideally together, but potentially separately).

It has always been registered as a dormant company and has never traded.

It was owned by Ownergy Plc until 1st April 2012, when all 1000 issued shares were transferred to WolfeWare Limited, which remains the 100% owner.

The website www.RHIncentive.co.uk was established in July 2009. Since April 2010 (when the Feed-in Tariffs first came into force), the site has received an average of over 7,500 visits per month, peaking at times of major government announcements, and despite the lack of any active online promotion.

In a Google search on "Renewable Heat Incentive" it is listed 2nd, behind only the relevant DECC webpage, and ahead of the Energy Saving Trust and Ofgem. On Bing and Yahoo! searches it ranks #1; on Safari it is #3 behind DECC and EST.

Today it still averages over 6,000 visits per month. Other analytics available on request.

We would prefer that the buyer moves the domain name and the content to their own (or another) web-server and content management system, as it is presently managed as part of WolfeWare's other online facilities. 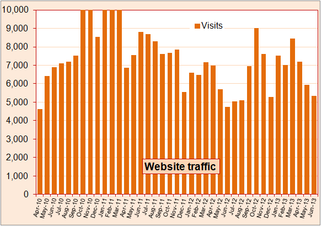 These resources can of course be very beneficial to any organisation which wishes to establish a major position in Renewable Heat in the UK.

We invite bids using the form on the right or by email, and aim to select a purchaser by Tuesday 6th August 2013.

We also operate the related company Feed-in Tariffs Limited and its website FITariffs.co.uk, which receives 17,000 visitors per month. We would consider selling this too, if bidders wanted to consider a package offer.