WolfeWare operates from premises with no gas supply, heated and partly powered by renewable energy 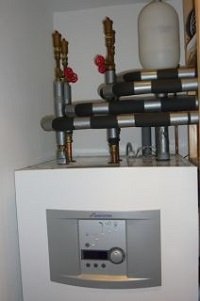 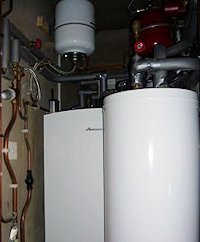 All the heating and hot water for Rose Cottage comes from solar thermal panels and a ground source heat pump. The heat pump extracts heat from fluid pumped through four 30m boreholes in the front driveway. The heat pump itself (left) is the size of a large boiler.

This heat store (right) with two large cylinders and various expansion vessels makes sure we have plenty of hot water and the heat is used as efficiently as possible.

The solar panels are mounted on a frame in the garden (see picture below), with the controls shown on the right in the garage.

The heating circuit for the house is partly underfloor heating, and partly standard hot water radiators.

We disconnected the gas when the ground source heat pump and solar thermal systems were installed. Through a minor oversight, that left the swimming pool unheated, so an air source heat pump has now been fitted.

These solar panels mounted in the garden face almost exactly due South and provide both heat and electricity.

We found solar panels with sizes and frames that matched so you can hardly tell the electric panels (on the left) from the heating panels (the three on the right) ... and yes, we did cut back the hedge to avoid shading!

Part of the electricity is produced by the photovoltaic panels alongside the solar thermal panels. We would have liked to install a wind turbine, but wind-speed monitoring show that our site is not windy enough.

Because the inverter (left) for the PV panels is in the shed under the array, we hardly ever see it, so we have a wireless repeater in the house (right) to see how the system is performing. 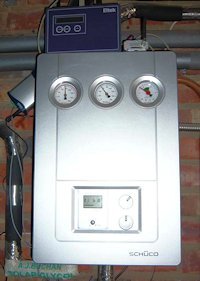 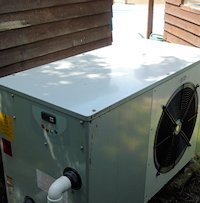